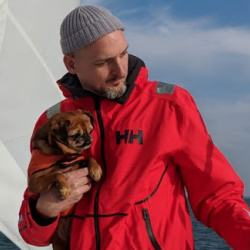 
We arrived in Corsica, a French island north of Sardinia, in mid-June 2019 and first docked at the Port de Bonifacio. Corsica was our target destination for months because the French granted Sha-Mayn a long-term visitor visa and we needed to get to France before the 3 month Schengen time limit was up. Corsica seemed like a good place to sail for an extended period of time, and we went around the island 3 times. It's the fourth largest and most mountainous island in the Mediterranean, dotted with quaint villages and many beautiful beaches and coves. 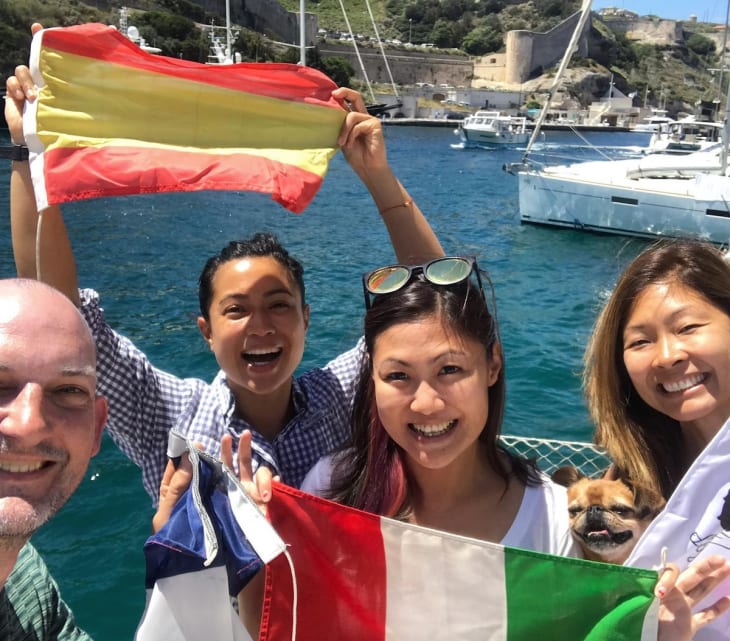 Happy crew with Ling and Jeanne holding 3 different flags we had flown in the past couple of weeks. Sailing from Spain to Sardinia, Italy to Corsica. 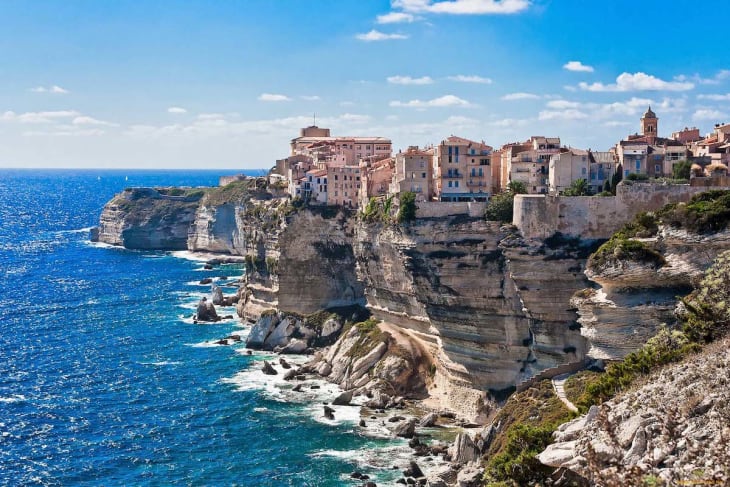 Impressive looking city of Bonifacio. (This photo was not taken by us) 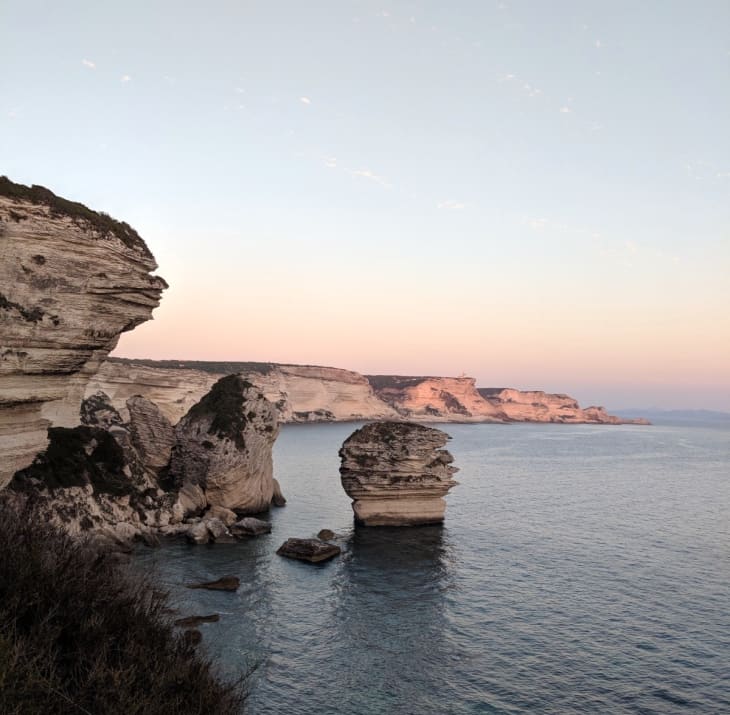 Strait of Bonifacio looking towards Sardinia 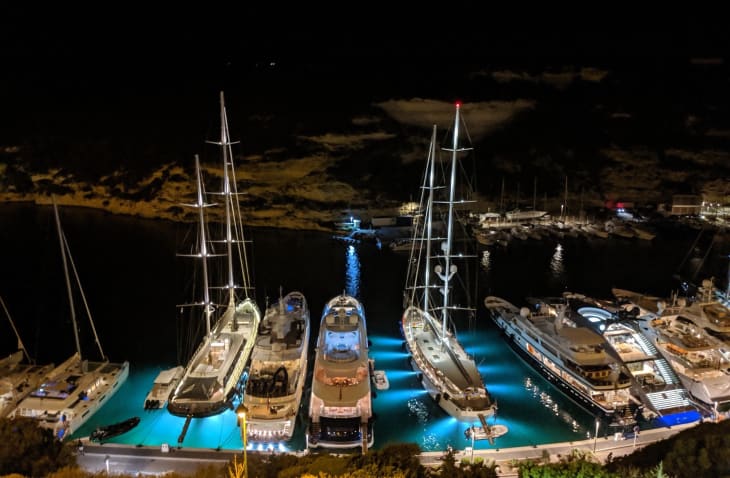 Superyachts on full display at the Marina de Bonifacio. 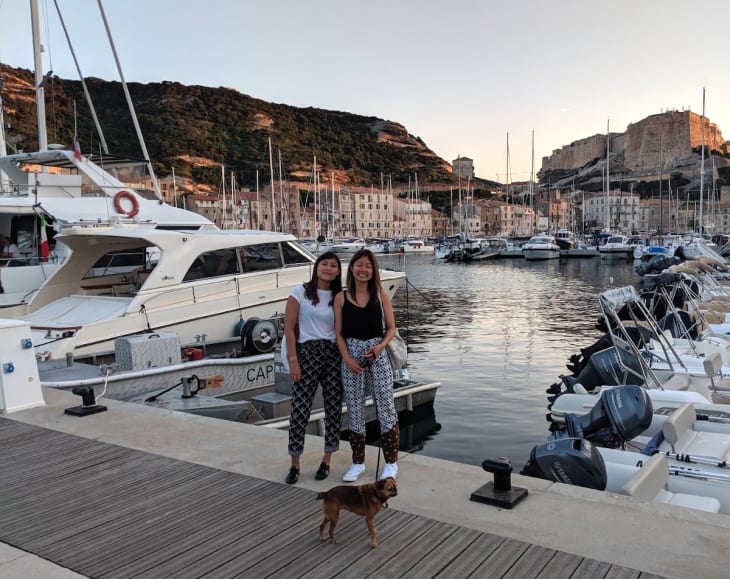 After a couple of days of rest, sight-seeing and cleaning the boat we said goodbye to our guests and continued our journey.

From Bonifacio to Bastia is about 90 nautical miles, ~15h by boat. We decided to leave in the evening and sail through the night to arrive early in the morning and get a spot at the Vieux (Old) Port de Bastia. 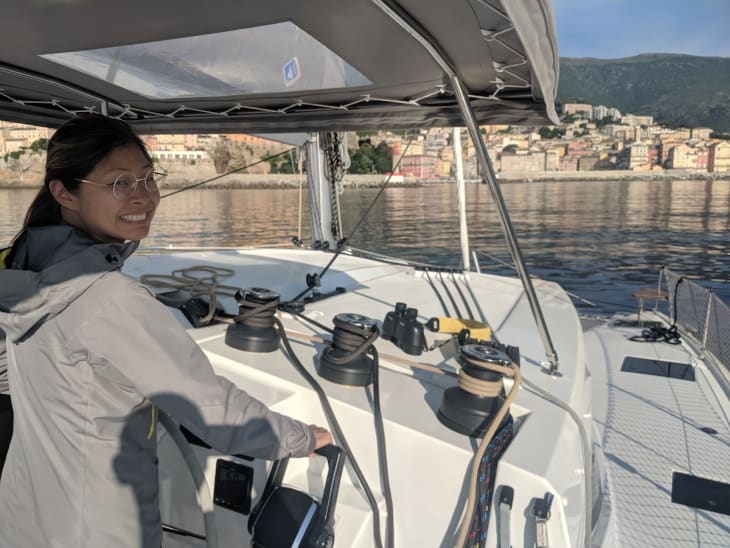 Here we picked up our next guest, my dad, who had decided last minute to travel with us for 1 week. We slowly sailed along the coast all the way up around Cape Corse to Calvi.

Dad had a warm welcome to Corsica. The weather was great and we were able to spend the night on anchor every day for almost a week. On the first night at anchor, there were random fireworks in our bay. The next day, we saw cows on the beach. 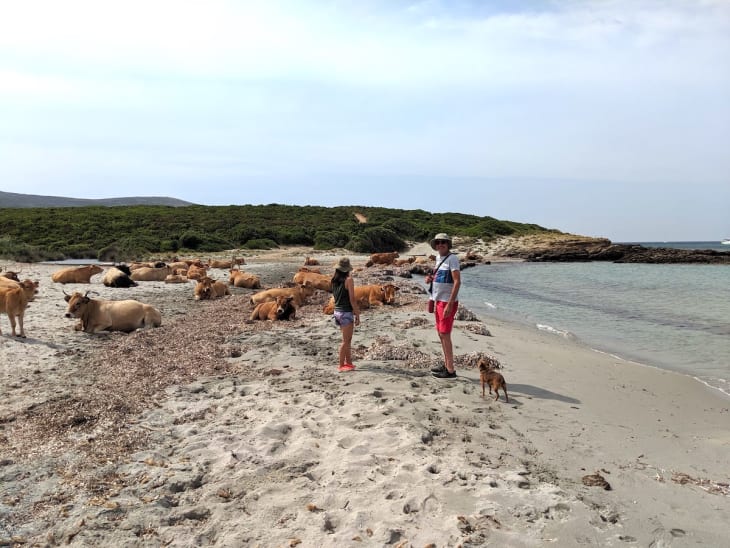 Cows chillin' on the beach 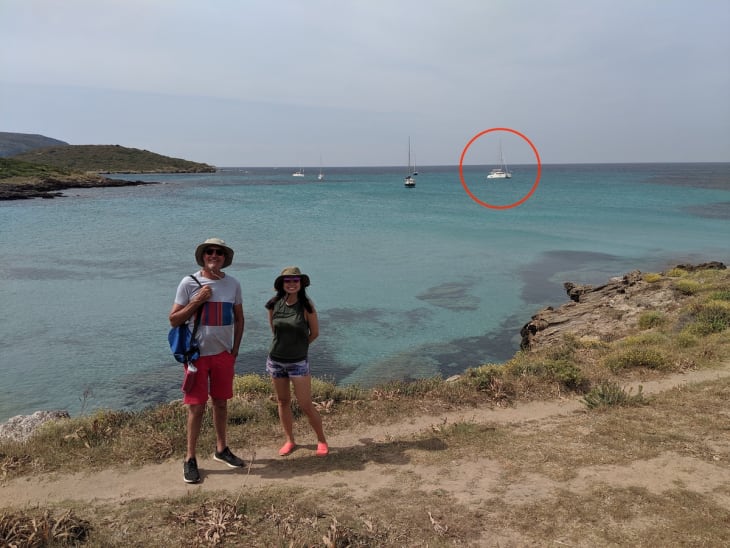 Exploring the coastline. You can see S/V Kaya anchored on the horizon. 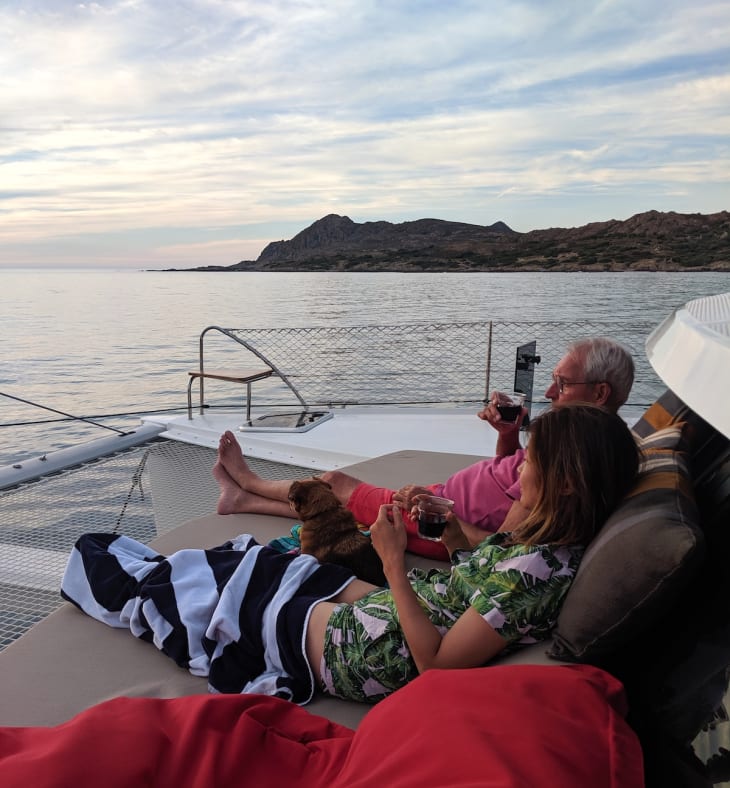 Enjoying the sunset in a bay all to ourselves.

The Corsican coastline is dotted with countless stone towers that were constructed around 1600 by the Republic of Genoa as a defense against pirate attacks. 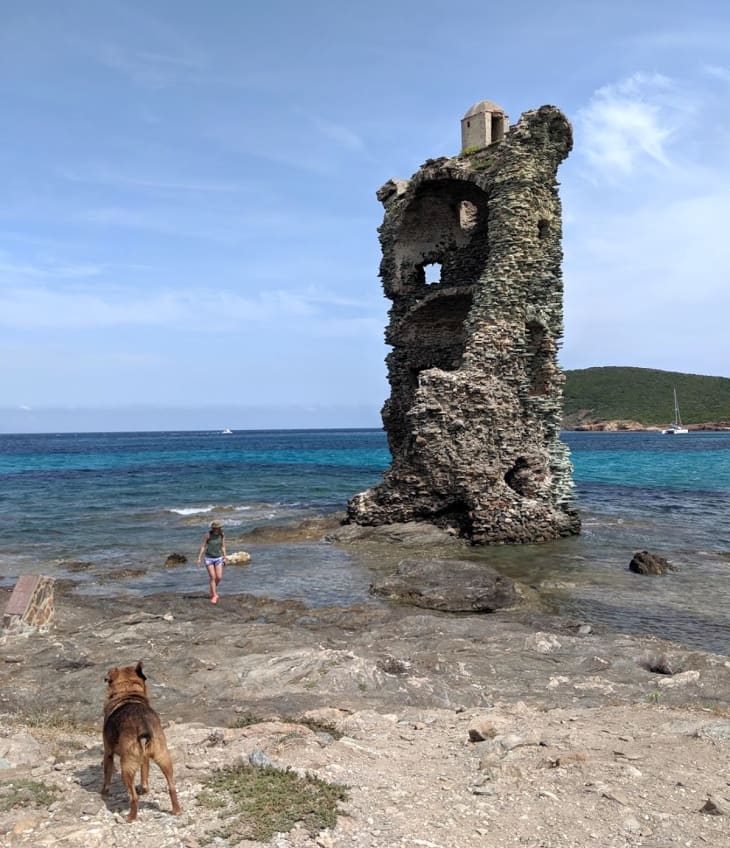 One of many Genoese towers along the coast. This one is in particularly bad shape but we saw others that were very well preserved. 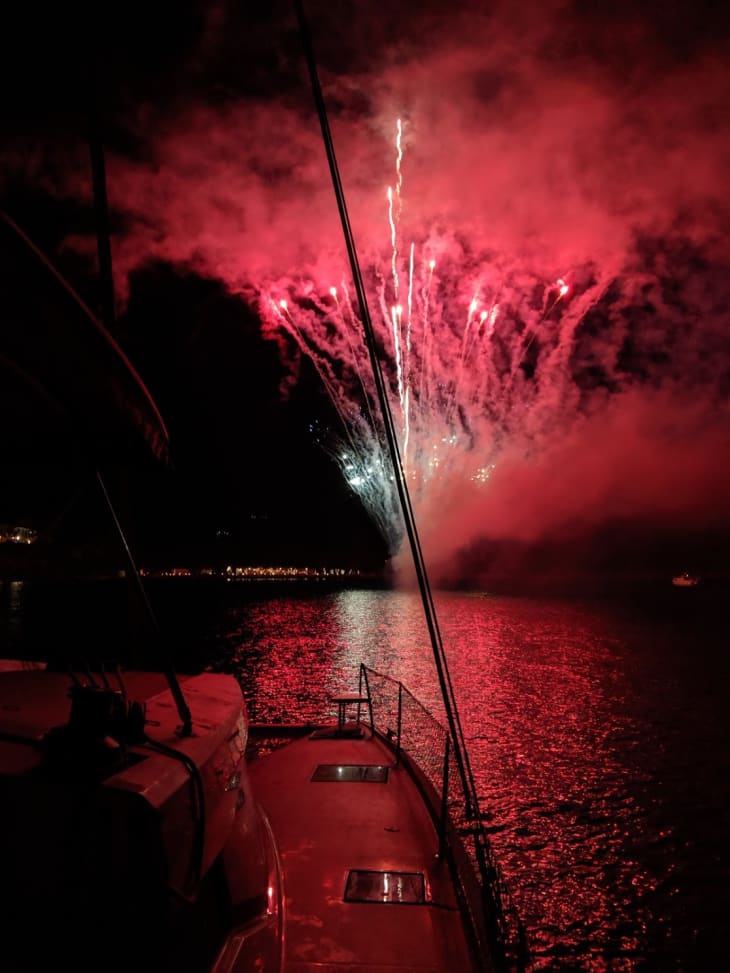 Random fireworks right in front of our boat. Twiggy did not like it. 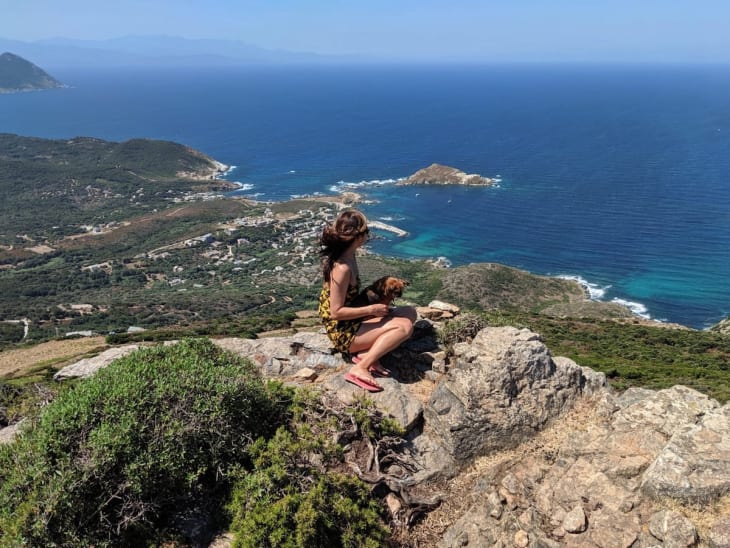 Looking down Cape Corse where we sailed through. This photo was actually taken much later when we rounded Corsica a second time and rented a car to explore the inland. 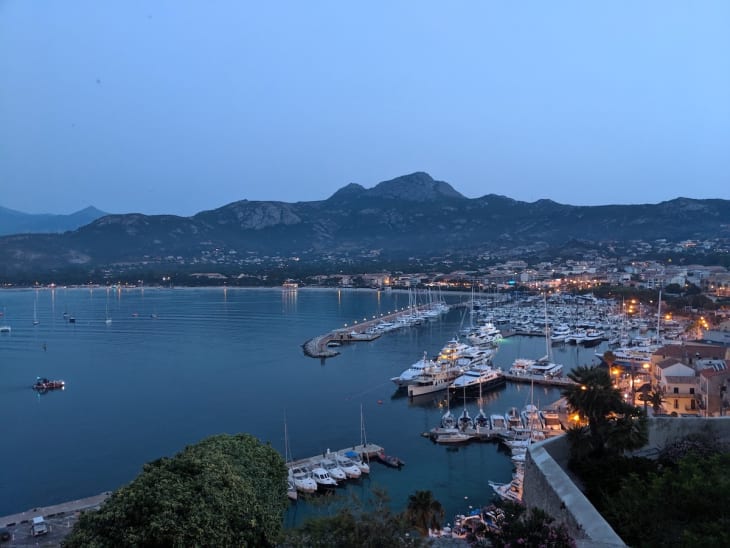 Calvi is located on the northwest coast and the 5th largest town in Corsica. This commune is surrounded by hills and lined with charming restaurants and cafes. According to legend, Christopher Columbus supposedly was from Calvi.

We picked up our new guests Brett, Jazmyne and Asia and continued our journey around the island.

The West Coast of Corsica is more remote and rugged with beautiful beaches and little coves only accessible by boat. It includes some of the most dramatic scenery of the Mediterranean.

Planning to sail down the West Coast is more involved because there are not many safe marinas to take shelter from the mistral north-west wind. The mistral can blow continuously for several days at a time, with wind speeds at 45 miles per hour and huge waves making it too dangerous for small boats to sail there.

Luckily however the weather forecast is quite accurate and signs of a mistral brewing in the south of France show up days ahead. When that happens all boats leave the area to find shelter on the other side of the island. 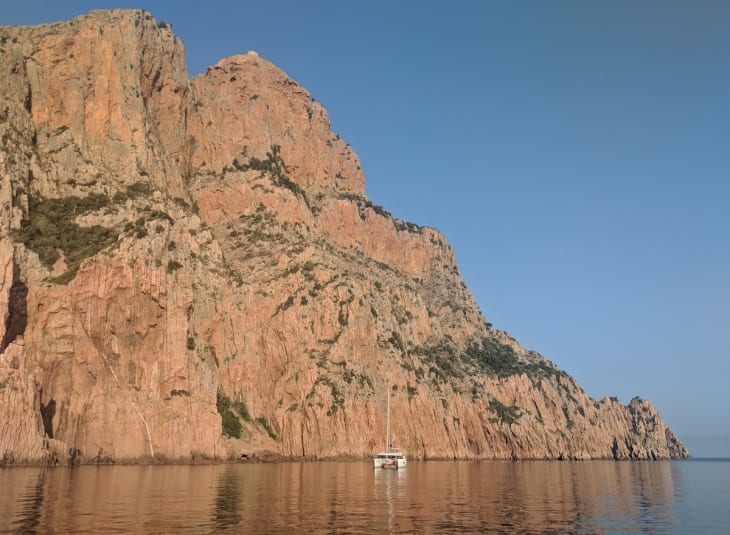 Kaya at anchor near Capo Rosso (westernmost point of Corsica) 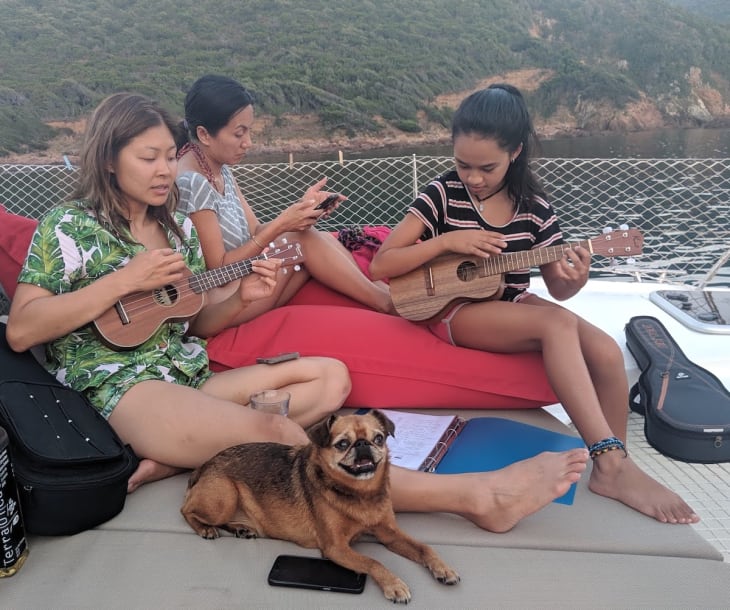 Sha-Mayn and Asia performing their version of "Take Yours, I'll Take Mine" by Matthew Mole 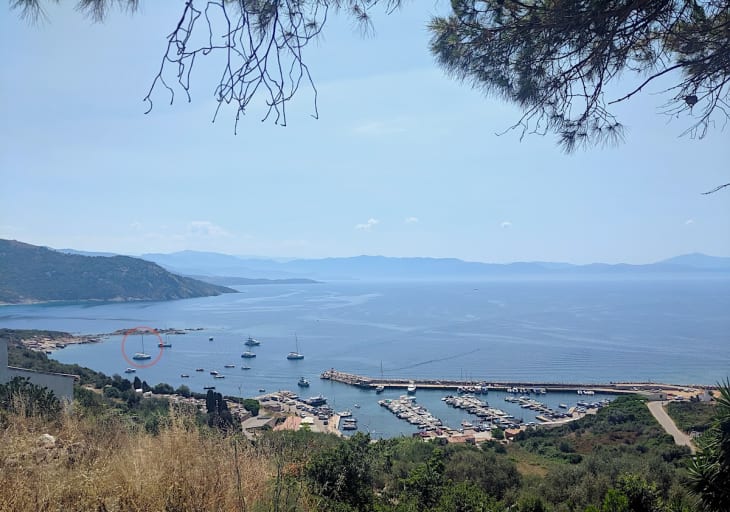 Looking down at the small fishing harbor from the village Cargèse on top of the hill. 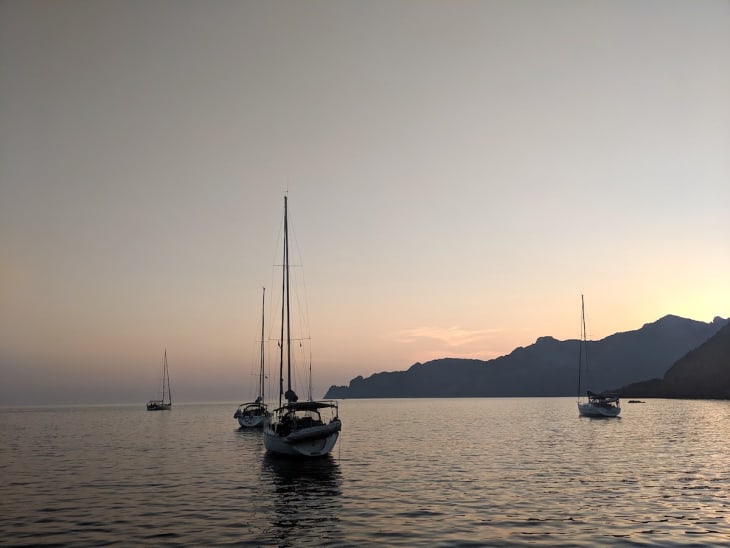 Girolata bay on a very hot summer evening. The village of Girolata is accessible only by sea. 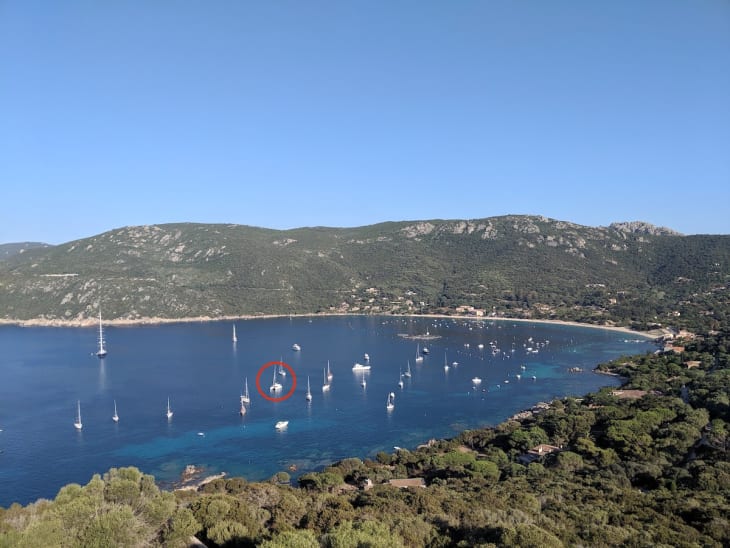 Campomoro was special, not only because we celebrated my 40th birthday there, but because we had a new visitor, a dolphin that was playing around our boat at anchor. We usually don't expect to see a dolphin in such shallow waters. We jumped in the water and Asia was able to capture on the GoPro the dolphin who came incredibly close.

Dolphin getting a backrub on the anchor chain.

The trip all around the island took us about 3 weeks, doing the last patch from the straits of Bonifacio back to Bastia again 15h overnight.

Cruising around Corsica was amazing and definitely one of the highlights of 2019. Despite the warnings of Corsica being overcrowded during the summer months we never had issues finding a safe anchorage or marina for the night.

This post only scratches the surface about abut sailing in Corsica and I'll write more in part 2 about our experience facing more challenging weather conditions.