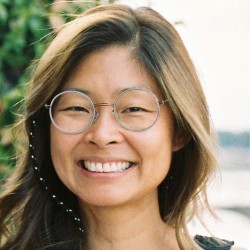 
We slipped back into boating life like a dream in the incredible sailing grounds of the Dalmatian coast, starting from the bay of Kotor and heading north. Croatia alone has ~1200 islands, meaning we've barely scratched the surface. 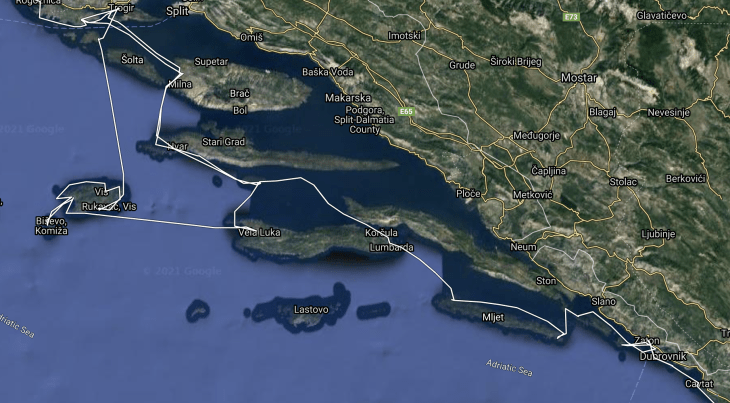 This map shows maybe half of the Croatian coastline. We checked in at Cavtat and made our way north.

We've spent most days on the boat in little bays, socially distanced. We miss friends, but people here are approachable, friendly and speak English well. We've appreciated any human connection more than ever. We met a crew of lovely Australian boaters who have the same make of boat, and they told us about sailor communities (on FB). There we found complete strangers who gave us incredible help and advice. During our first long passage, Kaya's batteries stopped charging to 100% and this worried us for weeks. After posting a question online, one American sailor spent an hour texting with me about shunts and pointing out where they were in our engine room. Also, it was a very special time when our dear friend, the elegant and vivacious Putri, came to visit for a week. 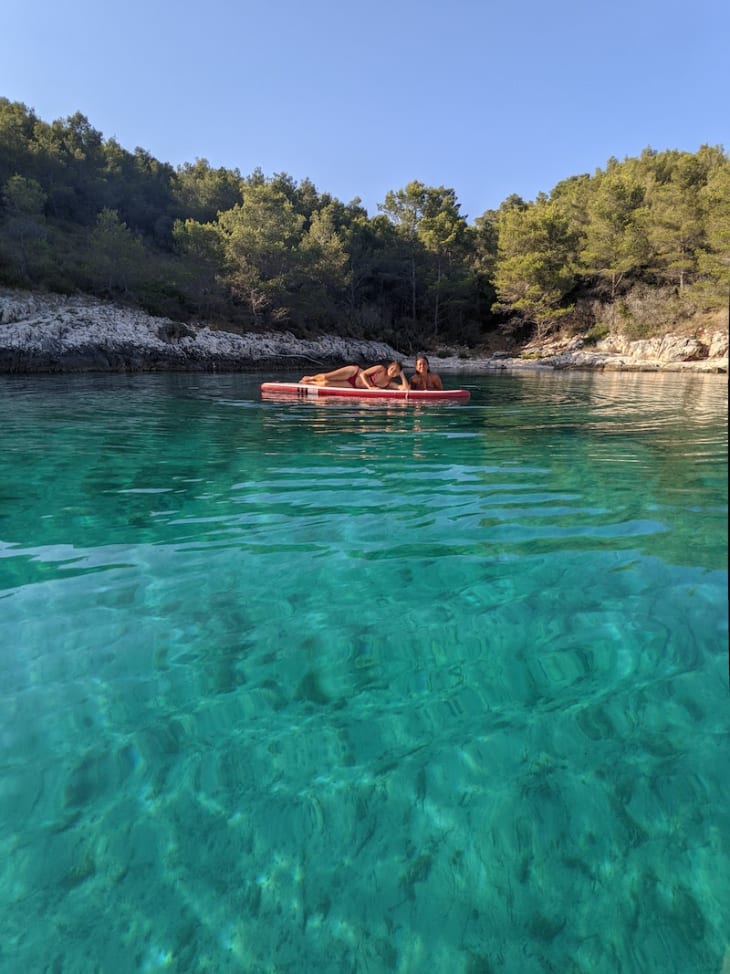 When we first got here, Tobi texted our sailing instructor Armin (who is Croatian) to ask him why the water is so blue everywhere?! Pictures don't do it justice. On a tiny island called Šćedro, with Putri. 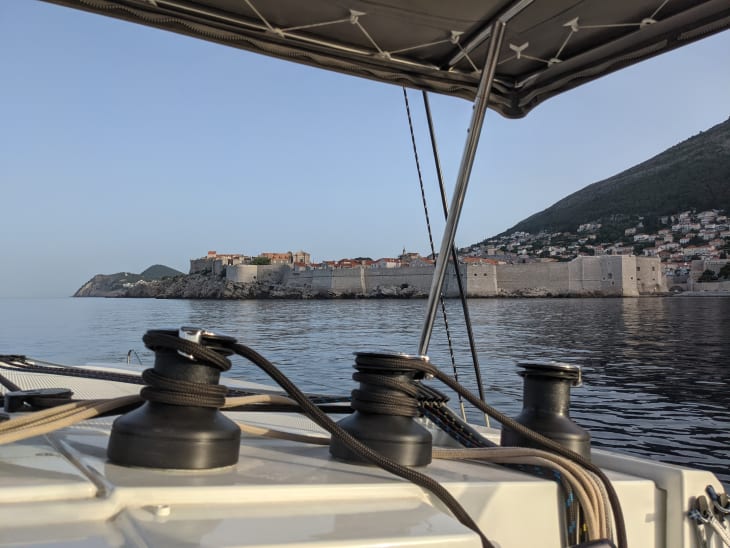 Passing by King's Landing. We recommend the Kawa store just outside the old city for Asian provisions and cool Croatian designs. 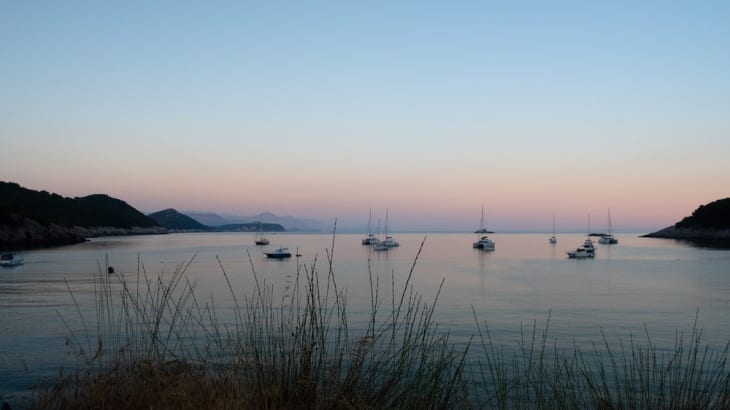 Uvala Sunj near Dubrovnik gets noisy with party boats, but up the hill we found a unexpected garden retreat full of hammocks called Rajski kutak Bindo.

In 2019, 90% of our fights were about docking/anchoring. This year, we are more confident and calm overall, but there are new challenges. We often have to "take a line ashore", meaning that after putting down an anchor, one of us (usually Tobi) swims or paddleboards to the shore and attaches a long rope to a rock and a tree while avoiding getting spiked by a sea urchin. This is needed to prevent the boat from swinging (like it normally does at anchor) when the bay is too small or too popular. In June, we saw mainly local and European sailors with a smattering of Americans. By late July the charter boats were in full force, filling up marinas on the weekends (pro tip: leaving popular sights empty on Saturdays). 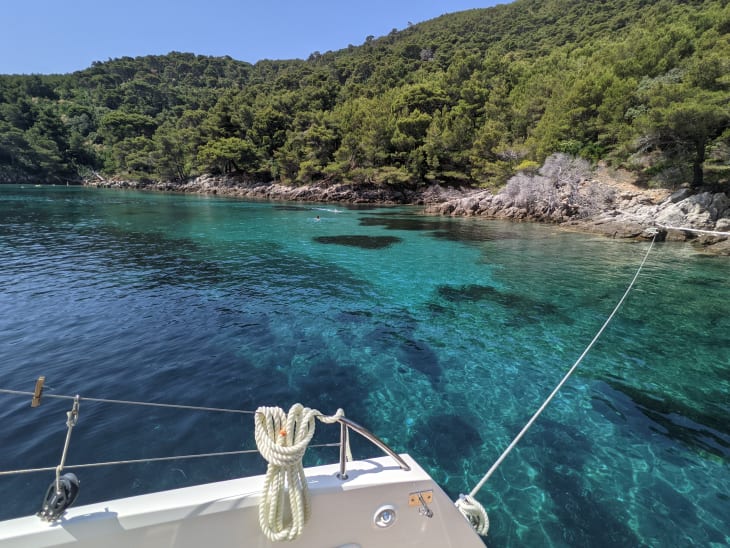 Uvula Spilice right outside Dubrovnik was unexpectedly uncrowded but other boats were tied up so we followed suit. Yup, there's water like this everywhere in Croatia.

Croatians have laid many mooring buoys in popular spots that you can pick up and attach your boat to. We like using these buoys. They feel relatively secure, are cheaper than the famously expensive Croatian marinas, and are better for the protected Posidonia seagrass. We don't mind paying for buoys in nature parks because they are well taken care of. Sometimes they are owned by restaurants and you're just expected to dine there, or they cost 30EUR and up, and are sometimes bookable (see my-sea.com). 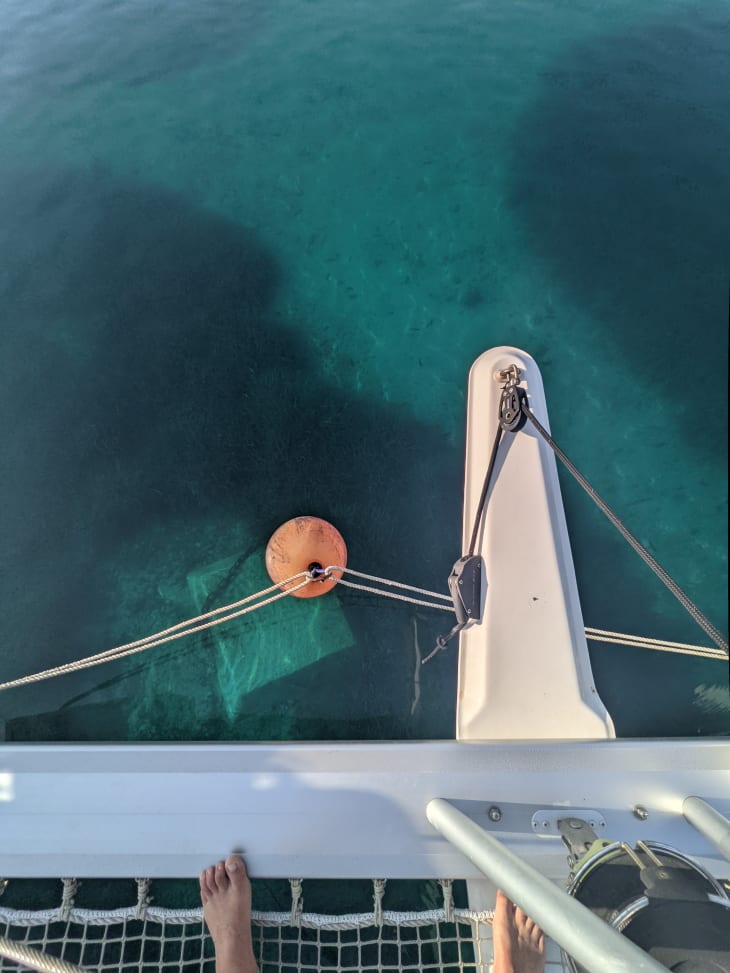 A buoy in Uvala Gradina in Korcula.

Sailing a new region means learning a new weather system. After being unpleasantly surprised by stronger winds than predicted by our usual apps (Windy and PredictWind), we started checking the Croatian and Italian marine text bulletins that are also read out on VHF a few times a day. They are pretty general but probably the best way to catch (or rather avoid) our most feared "Bura" wind. Unlike the Mistral from the South of France, the Bura can show up with little notice. We lean heavily on Navily.com to find sheltered anchorages, buoys or marinas that are reviewed by other sailors. 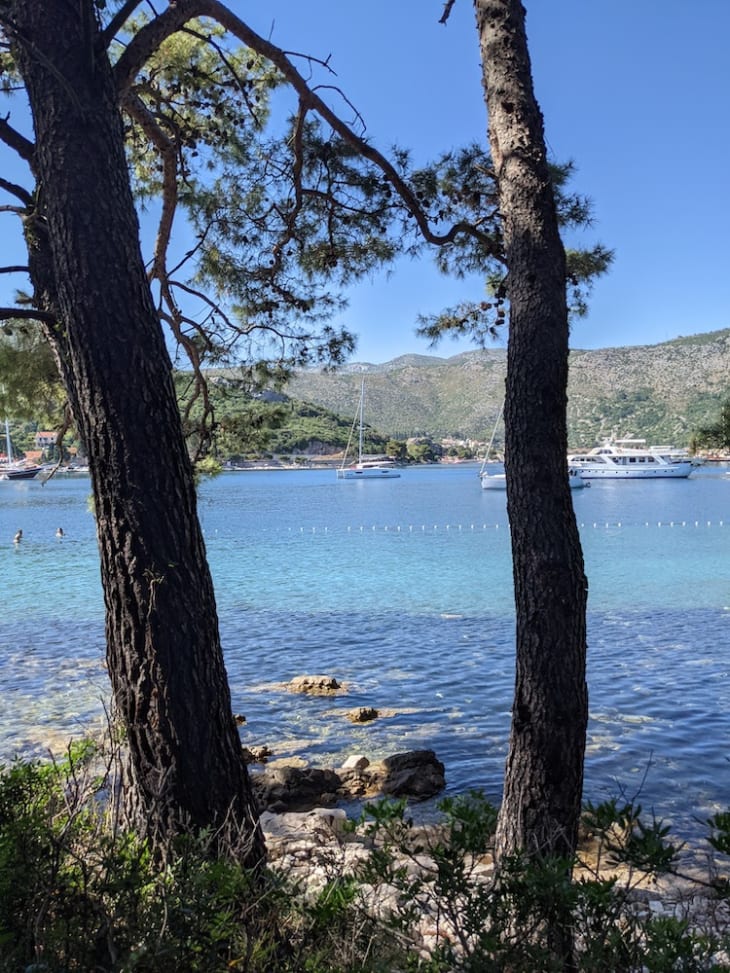 Some places that appear safe can have a funneling effect. One morning, we woke up in Zaton Bay to 20 knots, and when we left to find shelter elsewhere, we were surprised to find that the wind strength dropped to 7 knots right outside the bay. 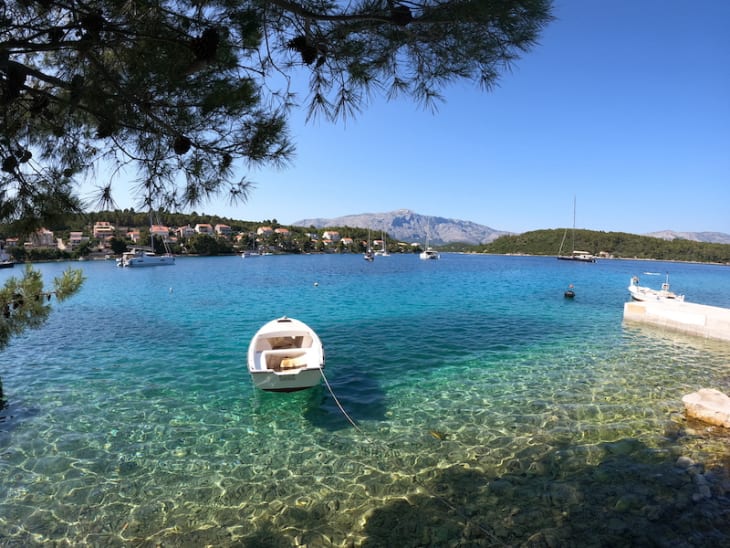 Uvala Javic has 100% protection score on Navily.com and is close to the old town of Korcula and wineries. 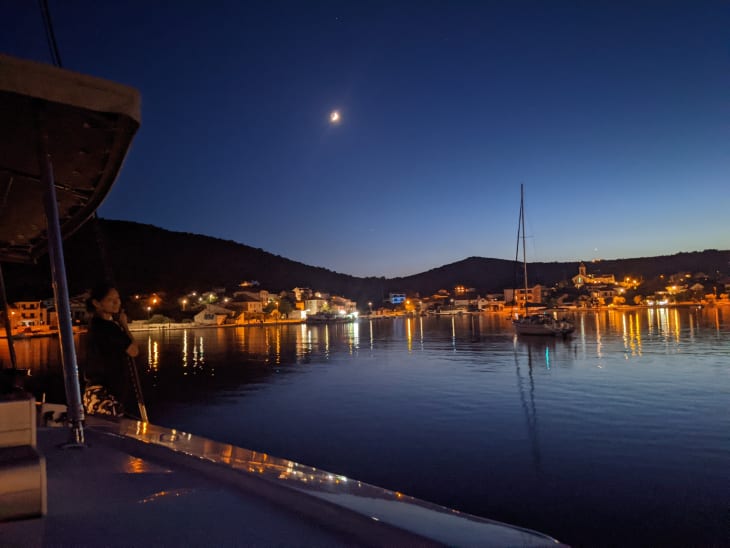 Vinisce near Split is a spacious bay where we felt safe enough to leave Tobi single-handed for a few days. Because it is circular, there's a luminous light effect on the water at night.

Otok Mjlet is a must. The west side of the island is a national park (tip: you can use a restaurant buoy or dock in lieu of park fees). We stayed in the quaint town of Polace in a stunning anchorage and rented e-bikes to get to these even more stunning salt lakes. It was amazing to bike around a lake on an island that also has an island in it. 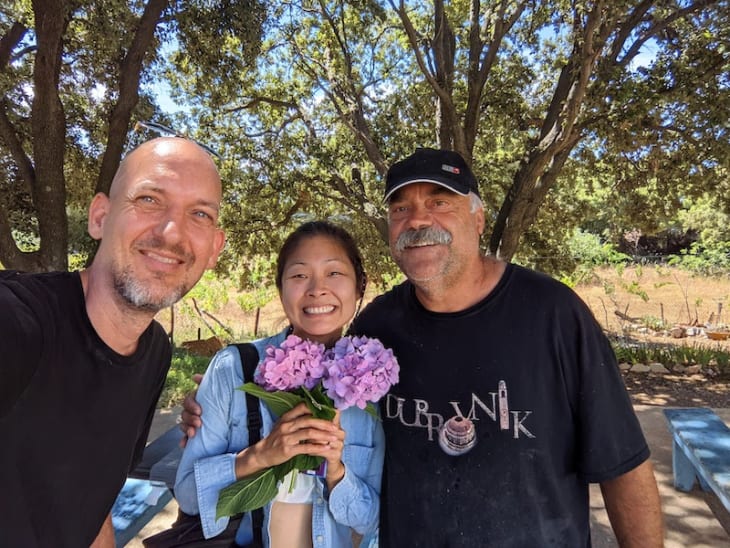 In Saplunara on the east end of Mjlet, this nice man offered Twiggy some water, then gave us coffee, maps, snacks and flowers! And we didn't even tell him it was Tobi's birthday.

Otok Šćedro is a tiny island just south of Hvar that is beautiful and surprisingly rugged. We found Uvula Borova by chance when looking for shelter from the NW prevailing winds. In the evening, we took a long and slightly eerie unlit walk through forest to the village of Moster that has been inhabited by one family for generations, and ended up having dinner with a lovely Croatian couple from the other boat in our bay. 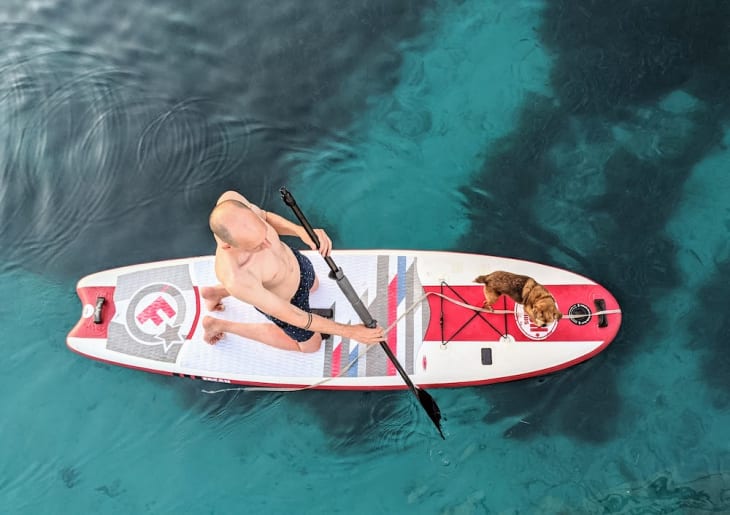 Taking Twiggy to shore at dusk.

We spent a week on Vis. Our Croatian sailing instructor Armin told us it's his favourite island, and we can see why. 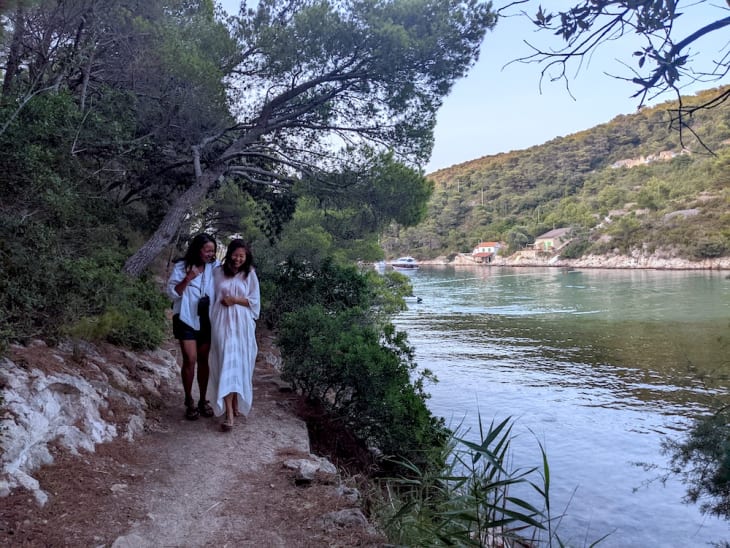 Stončica beach has an underrated restaurant with giant wood-fired ovens. If fresh butterfish is on offer, get it. 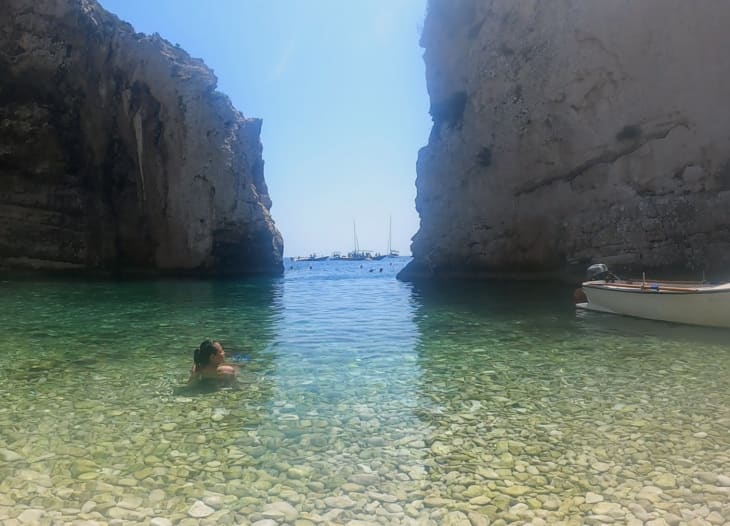 We took a buoy at the famous Stiniva beach for the afternoon and swam to shore. 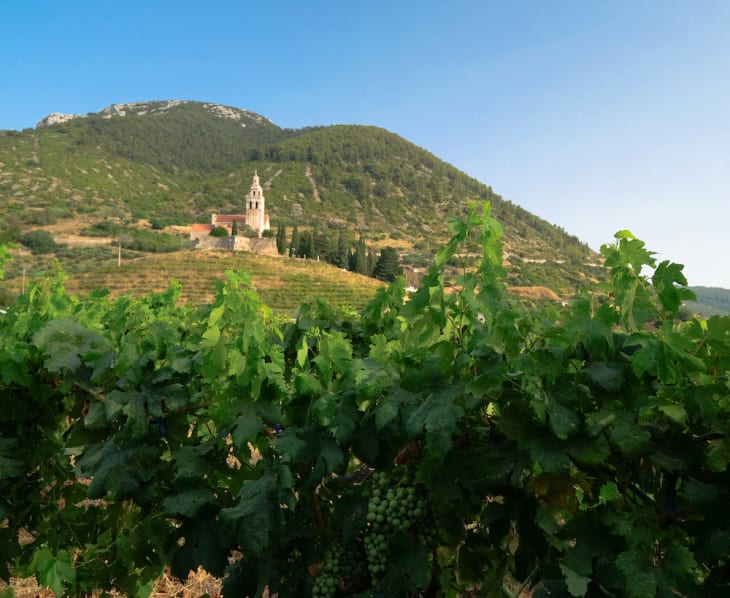 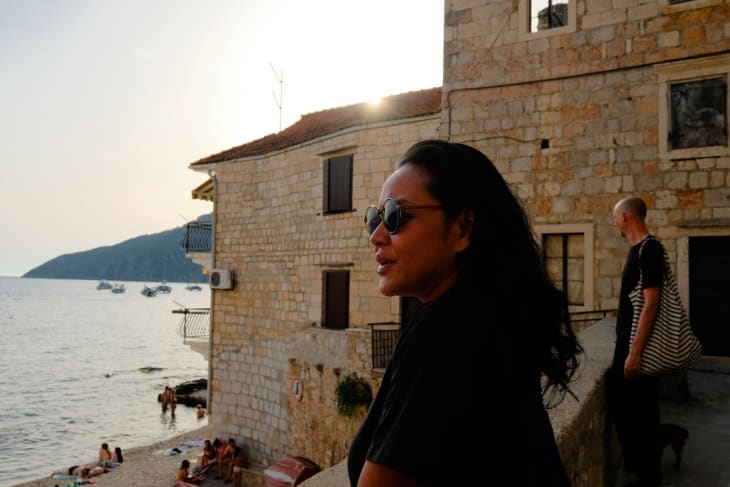 At least 3 Croatians told us: "You must go to Komiza, it is exactly how things used to be." We recommend the food at Konoba Bako and hip Croatian design store FabrikaVis.hr. 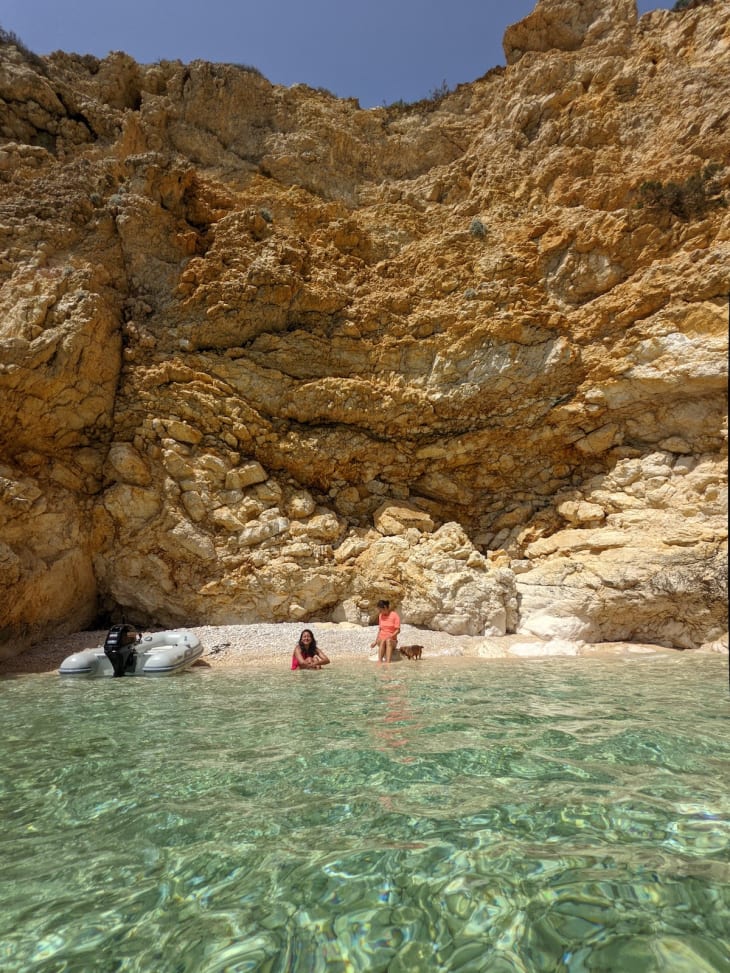 We had this spot all to ourselves on the tiny island of Bisevo, opposite Komiza. 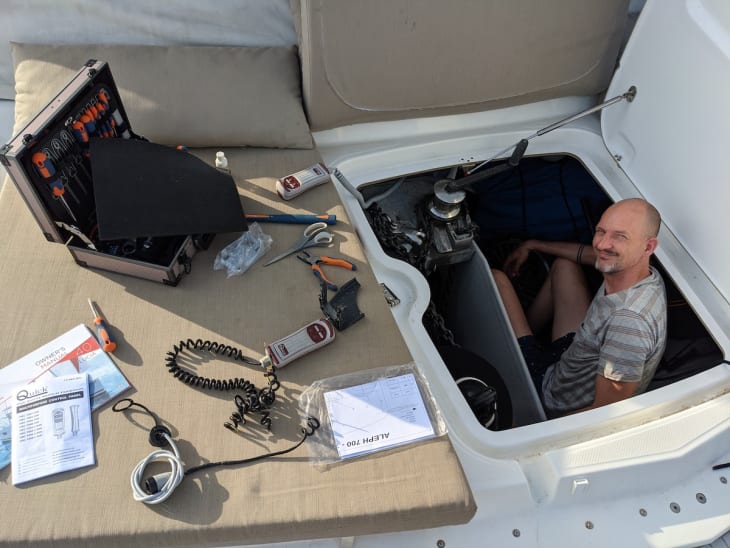 Things were not always rosy! We couldn't fully pull up the anchor after the windlass remote cord snapped. Luckily, we found a mooring buoy nearby and Tobi managed to fix it.